A Challenge to Break Male-Vested Politics:The “She Will Run” project by Green Party Korea.

Green Party Korea’s women candidate incubating campaign “She Will Run” is receiving great attention. The campaign aims to help potential candidates planning to run for the general election on 15 April 2020, and began in May 2019 with a public lecture series.

Green Party Korea, which has always opened an equal opportunity for all women to participate in politics, developed the “2020 Women’s Run Project” with the intention of training candidates to run for the general election through six months of training. It is a year-long excursion to systematically create politicians who will represent the Greens and reach the political front as a candidate in the general election.

The campaign focuses on encouraging the participation of female minorities and empowering those who were alienated from the existing politics as candidates to directly represent their voices. It includes practical techniques such as how to effectively narrow down political messages, develop a campaign image, deliver a speech, articulate in a debate, link one’s story to policy and effectively communicate it to voters, and how to organize an election camp and cooperate with team members.  Candidates elected through the “Run” are eligible for a certain level of campaign financing from the party until April 15, 2020.

The year 2020 is the 20th anniversary of the country’s enactment of a women’s quota system. However, the National Assembly of Korea has less than 17% of women representatives. The Green Party, which puts diversity and women and minority human rights at the center of the program, has planned the project in line with its goal of seating 50% women and 30% youth in the National Assembly.

Shin ji-ye, the co-leader of Green Party Korea, described the campaign as “a year-long project that attempts to incubate many people at the same time  may not be perfect, nevertheless, I expect it to perform its role in locating many candidates who identify themselves as a voice and a woman in politics.”

In the fourth public lecture, Green Party Korea has held a video conference with Christine Milne (Global Greens Ambassador) and Metiria Turei (Former co-leader of the Green Party of Aotearoa New Zealand). This has been a place to empathize with the global need for gender equality in politics and the importance of Green politics.

Green Party Korea uses social media wisely and plans to open various social media events to spread the words of the campaign around. All are welcome to  watch the development of this project on the website, www.werun2020.kr. 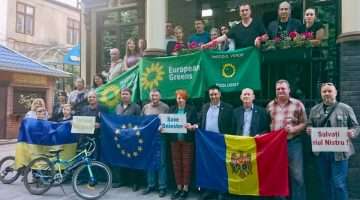