Thank you to everyone who attended this month’s webinar with Javier Guerrero and Sofia Duran – the General Secretary and Vice President of Partido Ecologista Verde/The Chilean Greens.

If you missed the webinar and would like to watch a recording, you can find it ici or below.

Hosted by Keli Yen, the former co-convenor of the Global Greens, and interpreted by the wonderful Ann McFall, the webinar involved a fantastic discussion of green politics in Chile and a detailed overview of the current constitutional crisis in the country. With attendees from over 20 countries and hundreds of views on Facebook live, the webinar was a fantastic opportunity to have a global conversation about the issues and show solidarity for our Chilean colleagues.

The conversation began with Sofia laying the groundwork of who the Chilean Greens are. Partido Ecologista Verde (PEV) was founded in 2008 on the core principles of participatory democracy, social justice and building a sustainable society. The current president Felix Gonzalez is also a member of Chile’s lower house, and four other members are current representatives at the local level.

Sofia and Javier then discussed the party’s perspective on the large-scale protests in 2019, which created momentum for the 2020 constitutional referendum. With the highest cost of living in South America and an inadequate minimum wage, many Chilean citizens have grown frustrated with economic inequality and the deterioration of quality public education. When metro fares in Santiago rose in late 2019, tension erupted into large-scale protests that were met with violent military oppression at the order of president Pinera.

From the perspective of many Chileans and the PEV – the existing constitution, which legitimised these conditions, needed to be re-written in order for meaningful change to occur. Javier and Sofia were pleased with the results of the referendum – Chileans overwhelmingly voted in favour of creating a new citizens assembly to re-write the nation’s constitution.

Excitingly, the PEV has 411 candidates running in the 2021 elections – 76 running for a seat in the new Constituent Assembly, and the remainder running in local and municipal elections.

A particularly interesting part of the webinar involved Javier sharing PEV’s electoral strategy in the lead up to April 11. Hoping to distinguish themselves from the major political parties, the party has adopted a policy of avoiding handing out physical flyers to the public unless they can be printed on eco-friendly paper. With the help of daily, 30-second slots of airtime on national television channels, PEV hope to have enough electoral success to establish ‘green municipalities’ throughout Chile.

Beyond their electoral strategy, Sofia and Javier also shared their hopes and expectations for the new constitution – a topic that audience members were keenly interested in. Questions surrounding the electoral process for ratifying the new constitution, and on instituting protections for the LGBTQ+ community, for example, were answered insightfully by Sofia and Javier.

A key hope for the new constitution is the redefinition of water as a public, rather than private, individual good. This small change would ensure that water was given to citizens, rather than mining and agricultural industries, as a first priority. This, in conjunction with explicit protections for animals and the environment, could be a major step in the direction of better protecting Chile’s beautiful natural environment.

They also shared their excitement that after years of advocacy on the topic, the new Constituent Assembly is guaranteed to have full gender parity, and mandated quotas of Indigenous and disabled members.

Thank you again to Javier and Sofia for their time, and for sharing their experiences and perspectives with the wider Global Greens audience. We will be watching the April 11 elections closely, and wish Partido Ecologista Verde the best of luck for their candidates!

If you missed the webinar and would like to watch a recording, you can find it ici. 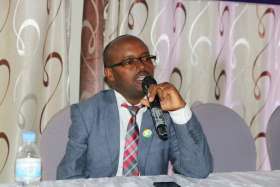