Closing statement from our delegates:

Global Greens from all corners of the world arrived in Glasgow this November, marking the largest and most diverse Green presence ever at a COP. Over 100 greens from over 40 countries participated as part of observer delegations, and seven Green Environment Ministers were part of negotiations. We also welcomed the first Global Young Greens delegation to COP, who recently secured permanent accreditation. In parallel, the Green Hub, co-hosted by the Green European Foundation, European Green Party and Scottish Green Party, became a catalyst for Green networking and dialogue in Glasgow, with more than 1500 Greens passing through its doors.

Now the international climate negotiations have come to an end, the Global Greens delegation can report on the lack of ambition in commitments made by world leaders. The agreement reached at COP26, coined the ‘Glasgow Climate Pact’, is unsatisfactory and weak at best. The decisions taken are still insufficient to keep the temperature at acceptable thresholds to avoid climate catastrophe and irreversible damage. Whilst we welcome the commitment to “phase down” oil and gas, we believe this language does not convey the necessary urgency to tackle the climate crisis. Fossil fuels need to be completely phased out.

Industrialised nations have failed countries most affected by the climate crisis, both in adaptation efforts and in establishing a ‘loss and damage’ finance mechanism. Countries of the Global North continue to break their word by deviating from the $100 billion dollar contribution promised years ago, and whilst there was nearly a breakthrough moment for loss and damage, in the final moments, it was watered down to simply holding a “workshop”. Once again, COP has failed those already living the impacts of the climate crisis, and those who will suffer the most as a consequence.

The process that began in Paris in 2015, which was already a mixture of miracle and disaster but undoubtedly a turning point, is still alive and moving in the right direction. However, such commitments and ambition would not exist without the pressure from youth and the most vulnerable countries. Those who have ensured that the pact appeals for greater climate ambition in line with, and beyond, the Paris Agreement.

For us to arrive on time to reverse the climate emergency, we can no longer walk, we have to run. It is crucial that we act in this decade; with each country ensuring quicker and more ambitious targets, expanding upon the best of Glasgow pact. Every fraction of a degree counts. Preparations for COP27 in Egypt must start now, and with a very clear demand: climate justice must be at the heart of any acceptable international climate agreement. Mechanisms also need to be applied to ensure that countries keep their promises. There is no going back.

The Global Greens delegation was proud to witness the strong Green presence during the summit, demonstrating the growing momentum we are experiencing worldwide. With more Greens entering government, we hope to further strengthen and expand our Global network – the only political force that can bring a united Global Green voice to COP27.

The Global Greens delegation would like to thank the people of Glasgow for opening their doors to delegates who faced a major accommodation shortage during the COP period – thank you for your hospitality!

The delegation would also like to give thanks to the European Green Party for their financial assistance to help get Global South delegates to COP, and also to those that donated to the Global Greens fundraiser, which helped to provide vital subsistence support during delegates’ stay in Glasgow. 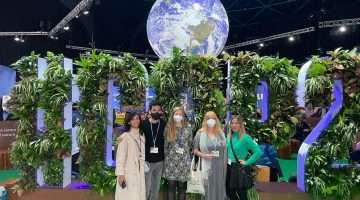 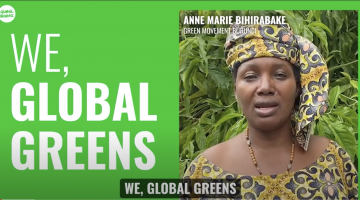