One year since the Beirut explosion, the vampire leaders remain

Today, 4 August, marks one year since the horrific explosion in the Port of Beirut. The blast left more than 200 people dead, 7,500 injured, and 300,000 homeless, in one of the largest non-nuclear explosions ever recorded. It has been 365 days, yet those responsible and complicit have not been held to account. Their corruption and criminal negligence continue to stain our collective humanity, and are an affront to the suffering and injury of the family, friends, and loved ones of those affected.

The Asia-Pacific Greens Federations (APGF) stands with all those in Lebanon and internationally demanding justice and accountability. Our compassion for the hundreds of thousands directly affected is matched only by our anger that the self-interest and corruption of Lebanon’s oligarchs continues, unstopped, to sucking the money, resources, and future of a proud nation.

Legitimacy is granted by the will of the people, and the will of the people has been expressed in abundance on the streets of Lebanon since before the Port of Beirut explosion: The cabal of petty tyrants whose only motive is greed and self-enrichment must go. Elections must be held. The time of corrupted governance and administration must end. Criminal officials must be held to account.

In the aftermath of the Beirut explosion, the people’s view of officials was made clear: “Please send help, but not through the government”. APGF shared and continues to support the view of activists and international governments alike that the endemic corruption among Lebanon’s leadership means that they cannot be trusted to deliver relief and a future for Lebanon’s people. A new generation of leaders is required if the country of Khalil Gibran, of majestic cedars, and of culture and beauty is to return and thrive.

Despite its devastation, the blast was only one symptom of Lebanon’s exploitation by those in power. Economic mismanagement by the government and central bank have thrown more than 50% of the population into poverty, while political and business officials shift money to offshore accounts. The currency has lost 93% of its value while banks and the financial sector continue to enforce a pegged exchange rate 10 times lower than its real value, depriving people and families of aid and assistance while enriching themselves. And the COVID-19 pandemic continues to rage due to ongoing government mismanagement.

APGF believes that Lebanon’s current political cartels are both unwilling and unable to fix the problems they have created. We believe that a new generation of leaders must emerge to replace the corruption of the old regime. We are proud to support the Green Party of Lebanon in their campaign for transparency, accountability, and justice for Lebanon. We regret that the tears for those killed and of those injured during the explosion a year ago have not been enough to wash away the stain of corruption of Lebanon’s government and officials, and stand with them in building a brighter future at next year’s elections. 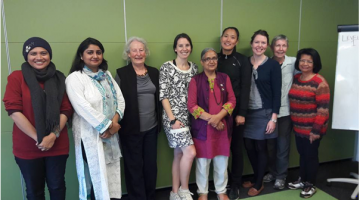