On behalf of the Global Greens, welcome to Liverpool. This is actually the first global Greens Congress we have held in the Northern Hemisphere.

We are expecting altogether with the 4-in-1 Congress we are having, maybe even 2000 people from more than 90 countries who will travel to you by plane, train, car, bicycle, on foot and possibly some got in on their own steam.

Welcome to everyone watching around the world as this Congress is streamed live. I also want to make a special hello to the people who would have been here if they could, but have visas denied for various reasons.

We wish you were here. We’ll do our best to represent your views. This is not a very Green way of treating guests in a country like this.

We are all the Global Greens and the Global Greens is us. The Global Greens is not them, it’s us. We as Greens everywhere around the world hold common values. We look outwards, recognising that we share one earth with all our fellow humans and with the myriad other living creatures that have evolved on this small planet. We look forwards, recognising that we must bequeath to our children and grandchildren a world no less rich, fascinating and full of possibility as the one we live in.

And we look out for each other recognising that real peace and security will only come from societies that are more equal and whose citizens can make decisions through genuinely democratic processes.

Green parties now have been around for more than four decades forming first in Tasmania and New Zealand in 1972 and soon after that, in the UK with the formation of People, later the Ecology Party.

The first gathering of Greens from different parts of the world was 25 years ago, on the sidelines of the 1992 Earth Summit in Brazil. Then in 1999, the Mexican Greens hosted Millenio Verde, the Green Millennium Conference in Oaxaca with 150 Greens 24 countries. That was followed in 2001 by the first Global Greens Congress in Canberra. With 800 people from 70 countries.

There, we adopted the Global Greens Charter. Our shared principles drawn from the charters of green parties around the world. Our second Global Congress was held in 2008 in São Paulo in Brazil we published 21 commitments for the 21st century. As well as the next steps for strengthening the Global Greens.

In 2012, the third Congress was in Dakar in Senegal where we adopted resolutions reflecting an increasingly cohesive Green politics worldwide and agreed to transform the Global Greens into a legally registered international nonprofit organisation which is what we now are. Now here we are in Liverpool with our fourth Congress.

Much has changed in that 40 years. Instead of predicting how unrestrained growth wouldn’t damage the environment we are collecting the evidence of what it is. Climate change, loss of biodiversity, ocean pollution and all the rest of the unfolding disasters. Inequality has grown. The rich are getting richer. Borders are back for people, but not for corporations.

The nature of work is changing, neoliberalism is unravelling, communications are instant and global. By comparison, I tell you that at the first global Greens Congress 16 years ago, most of the registrations came in the mail. With a stamp on the envelope.

We’ve gone from a world where the catchphrase was think global, act local, to one where we have to think and act globally as well as locally and at every level in between.

The grouping of four events that we are opening here today neatly symbolises the way that Greens are well placed to make a difference in this new world. We have our shared principles and we have the structures that give us the potential for action at all levels from local to regional, national and global.

The challenge for this Congress and for the next few years is to build that potential into power. We need to be networking, organising, learning from each other, cooperating, planning joint actions, helping on a global basis. That’s why I am particularly pleased that for the first time at a Global Greens Congress, we are including and highlighting the role of subnational governments, whether they are local councils, cities, prefectures, state and regional parliaments, and a myriad of other names by which these levels of government are known.

I gather that the sessions this morning were fantastic. Packed out and really interesting. That’s a really good start.

I wish all the Greens who are working in jurisdictions at those levels a really big welcome and hope you will be discussing how to build your capacity for collaboration and joint action over the coming days.

Before I finish, I want to remember two people who have made a major contribution to the Global Greens but sadly are no longer with us. First is Louise Crossley who actually was a migrant from the UK who fetched up in Tasmania and became a key figure in the formation of the Australian Greens.

She drafted, then negotiated the Global Greens Charter while overwintering in Macquarie Island, in Antarctica where she was base leader. No Louise, no charter. She died in 2015 but otherwise would have been here with bells on.

Similarly Steve Emmott who also died very suddenly and unexpectedly in 2015. Many of you will know him from the Ecology Party and then the Green Party of England and Wales, the European Greens and the Global Greens. We have missed him very much in preparation of this Congress, but he would be thrilled to see it unfolding as it now is.

They have both made a huge contribution and it’s good that we can remember them with that affection and give them that recognition here today.

They were both members of our Global Greens family as are all of you and being global, we rarely get to meet each other in person or even in the same time zone. The most important thing you can do at this Congress is get to know each other. I’m going to start off the introductions by asking people to put up their hands if you belong to the following groups.

Who was in Canberra in 2001? Look out for these people because they will be able to introduce you to others.

Our charter says we will support each other personally and politically with friendship, optimism and good humour and not forget to enjoy ourselves in the process. In that spirit, have a wonderful time in the next four days and welcome to Greens 2017 on behalf of the Global Greens. Thank you. 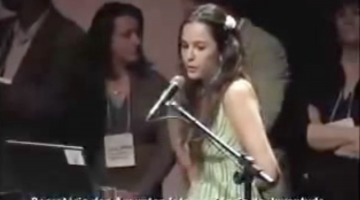 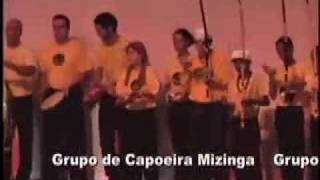 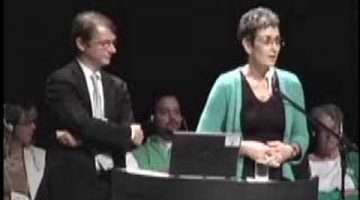