The 5th Global Greens congress will be jointly held with the Asia Pacific Greens Federation (APGF) and hosted by Green Party Korea in Seoul, July 2021!  We want to have a climate-smart congress and enable participation without traveling long distance!  We’re envisioning congress discussions held by Greens locally and with global input and interactions facilitated by internet-based collaboration tools.

Congress is a valuable opportunity for relationship building, learning, inspiration, debate, decision making and global solidarity forged thanks to face-to-face interactions.  We invite your ideas and help to solve the challenge of achieving this quality of interaction despite our geographic distance.  Join the discussion on the Global Greens Facebook page: https://www.facebook.com/globalgreens

This article features The Green Party of Aotearoa New Zealand’s (GPANZ) successful experience using online conferencing with delegates across the country to deliberate and decide on their government coalition agreement.

“It was an enormous success!  I am so proud of what we achieved, it’s a beautiful example of  Green decision making, and I hope we do it again”

GPANZ’s Te Awa magazine explains how the Zoom conferencing tool was used for democratic success.  Below are highlights from the original article, which can be read in full at https://issuu.com/te-awa/docs/te_awa_issue_59/16.

“The Greens pride themselves on inclusiveness, consensus decision-making and strong adherence to democratic values, but with members spread thinly nationwide getting together has always been problematic.  Until Zoom. The online, video meeting technology has become a party success story, says General Secretary, Gwen Shaw.

The pinnacle of the party’s use of Zoom, so far, was the 141-delegate Special Convened Meeting (SCM) that decided whether the Green Party would join the Labour-led Coalition Government.

During the 2017 election campaign, organising teams had started to use the Zoom system. “It was cheap, reliable even in rural areas – and we could see participants’ faces,” she says.  Post election, as it became clear an SCM could be necessary, thoughts turned to how one could be held. The fraught, down- to-the-wire nature of the coalition negotiations presented special challenges.

Party Leader James Shaw takes up the story. “It was obvious that a physical meeting in Wellington was not going to work because we could see no clear timeline – and we would have to move fast as the three-way negotiations worked their way to a conclusion.”

There would need to be at least 170 people on the call, including delegates from all 71 electorates, with members of the policy executive and the Negotiating Team able to make presentations.  Zoom enabled break-out rooms for some discussion; to take a vote on the call; and most importantly, because there was really no cost involved, every electorate’s full quota of delegates could be part of the voting process. An absolute win for democratic participation.

Individuals can register on Zoom.us at no cost and hold meetings, free, for 40 minutes.

Kate Mitcalfe adds that “I’m not a natural computer user, I prefer to be in spaces with people, but having said that I have been delighted to see the diversity of people who can be included in these online spaces and I have felt very comfortable in them as well.”

What enabled the online meeting to be successful?

“We had several people responsible for different aspects of the meeting,” explains Kate.  These included 141 Party Delegates with decision making authority and representing the country’s 70 electorates, also in the call were 14 negotiators and the facilitation team including:

This is how the Green Party managed to facilitate consensus-decision making on a complex, time-sensitive and important issue, using long-distance participatory democracy:

Step 1: We began with each of the negotiation team members introducing the proposed agreement and explaining why they had agreed to it.  The negotiators each came from a different part of the party so it was especially important that their voices were heard at the start of the session.

Step 2: Questions of clarification were written into the chat box.

Step 3: Discussion in face-to-face local breakout groups.  The provinces would have the option of having a real face-to-face meeting in each of the country’s 9 regions and provinces in which people can be physically together to discuss.  Each breakout room had a negotiator whose role was to answer questions of clarification related to any outstanding issues that would cause the delegates to block consensus.

Step 4:  After the breakout discussions we reconvened online to answer questions of clarification only.

Step 5: Take a break, in which Delegates had the opportunity to talk to any of the people whom they were representing.

When someone blocked consensus, we welcomed it because we embrace dissent as an important part of our movement.  We swe dissent as an opportunity to raise awareness to something that the others in the group didn’t see.

“I thought it was amazing, and that everyone involved across the party should be very proud because we were very principled, responsible, responsive to the voting public, we were nimble, the Green were just awesome, so I was very proud of us,” says Kate.

Kate continues, “this nodal gathering addresses the desire of members to be in the presence of one another.  People really want to be a good role model in reducing our carbon footprint.

We got quite a lot of press in New Zealand for the way we did our decision making using the online conferencing tool, so our success was celebrated even beyond the Greens.

I think it would be possible to hold the Global Greens congress on an online platform.  I’m a great optimist, and it would require careful planning, and there would be learning from the experience, but it could work!”

The New Zealand Greens experience could be useful for all Green parties who have the common challenge of facilitating participation and consensus decision making across the many scales of our movement across the country from the local to the global.

Share your reflections and help make the next Global Greens congress a success by joining the discussion about global conferencing on the Global Greens Facebook page here: https://www.facebook.com/globalgreens 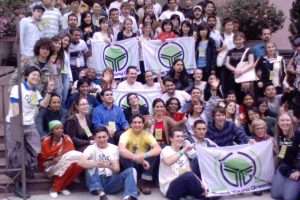