Resolutions and a wrap on what was the 3rd Global Greens Congress in Dakar 2012.

Around 600 Greens from 76 countries attended Dakar 2012, the third ever Global Greens Congress – and the first in Africa. Meeting in the Senegalese capital of Dakar between 29 March to 1 April, delegates tackled issues such as solidarity, democracy, biodiversity, climate change and the future of the Global Greens movement, and adopted a series of resolutions to pave the way to a stronger and even more cohesive green politics worldwide. 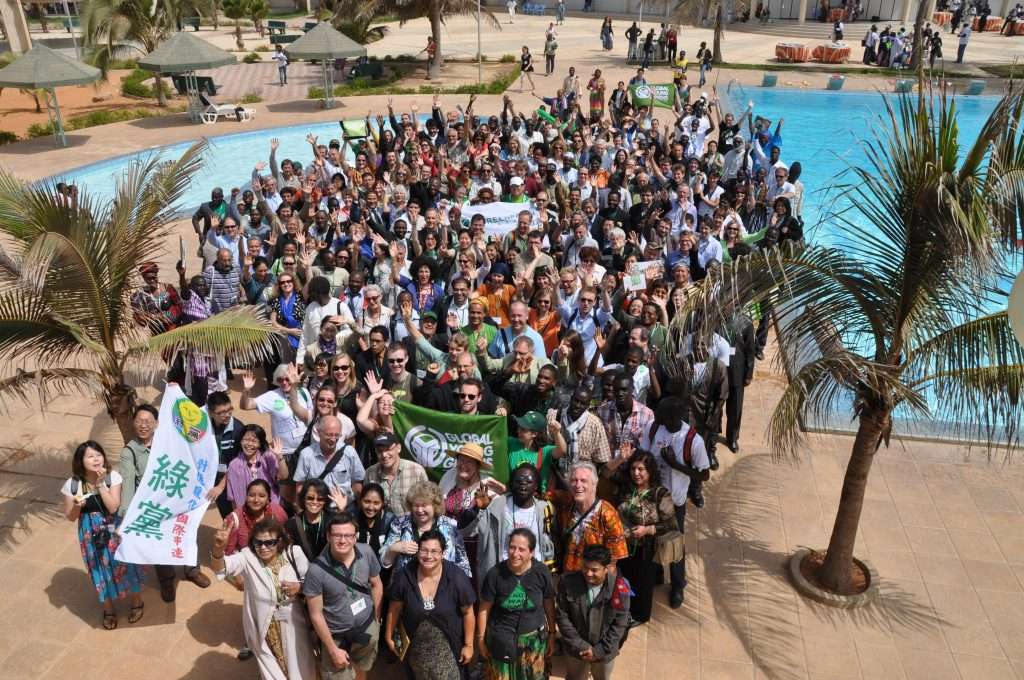 In response to the upcoming Rio+20 Summit, Greens emphasized the imperative to move quickly towards a Green economy globally, and on climate change, pushed for the adoption of international instruments to curb impacts of air and sea transport on climate.

Solidarity towards world populations like Tibetans and Syrians was unanimous, reminding how the issue of a democratic society and respect for human rights are central to green politics. The Global Greens also addressed the issue of Bhopal in a workshop, which resulted in a resolution accepted unanimously asking for the full accountability of Dow Chemical for the 1984 gas leak, one of the world’s worst ever industrial catastrophes.

The Global Greens Charter was also discussed and amended, including opposition to war crimes and sexualized violence.

“Africa is becoming an engine for democracy, both sustainable and green. The Arab spring has been for instance an open call for fundamental changes in politics and society, and an historical opportunity for the entire region. Women have been instrumental in this change: they were in the streets, taking an active role and trying to bring about change to their society”, said Haidar El Ali, President of FEDES (Fédération Démocratique des Ecologistes du Sénégal), the Green Party of Senegal.

“With the recent presidential elections and Macky Sall being elected as the new leader of the country, Senegal has seen the success of democracy, and we are confident it will continue to lead the way with the forthcoming parliamentary elections in June,” added El Ali, who days after the Congress was appointed Environmental Minister of Senegal as part of the new incoming government.

Juan Behrend, former Secretary General of the European Green Party (EGP) and current member of the Global Greens Coordination was very pleased with the success of the first Congress in Africa, “When we arrived, there was a clear democratic trend in the country that is changing the face of Senegal. We have adopted resolutions on the future of the Global Greens that will allow us to create better structures and improve the way we work together to advance the Green cause on a global level.”

Current EGP General Secretary Jacqueline Cremers was also happy with the weekend, and highlighted in particular the female participation as a significant aspect, “Strong women, who dare to stand up and speak out, to engage in politics and enjoy it – to engage with them and understand what makes them tick has been an inspiration and I am determined to do what I can help to advance the new Global Green Women’s Network.”

Keli Yen, Director of the Green Party Taiwan and convenor of the Asia-Pacific Greens Network described the event as “like gathering around an oasis, where we able to talk together as humans about profound issues such as poverty, hunger and sustainability, and what we as Greens can do about it”.

Venezuelan Green Manuel Diaz, recently elected co-president of the Federation of Green Parties of the Americas, was also at the Congress, and was delighted to see “such as strong environmental policy platform emerge from the Global Greens in advance of the Rio+20 talks in Brazil, in the hopes that we as Greens can contribute to a change in environmental politics”.

Before the beginning of the Congress, the four Green Federations and Networks – Africa, Asia-Pacific, Europe and the Americas – each held their own meetings to discuss internal business and how they would relate to the proposed resolutions of the Congress. In addition, the Global Young Greens met on-site and elected new Steering Committee members and made their own proposed amendments to the resolutions.

Future Functioning and Structure of the Global Greens

Ammendments to the political action section of the Global Greens Charter

Future Functioning and Structure of the Global Greens

Ammendments to the political action section of the Global Greens Charter

Against Nuclear in the Americas

European dimension of the way out of the Greek Crisis

UN Declaration of the rights of indigenous peoples

Women in North Africa and the Middle East

Protection of the Amazon